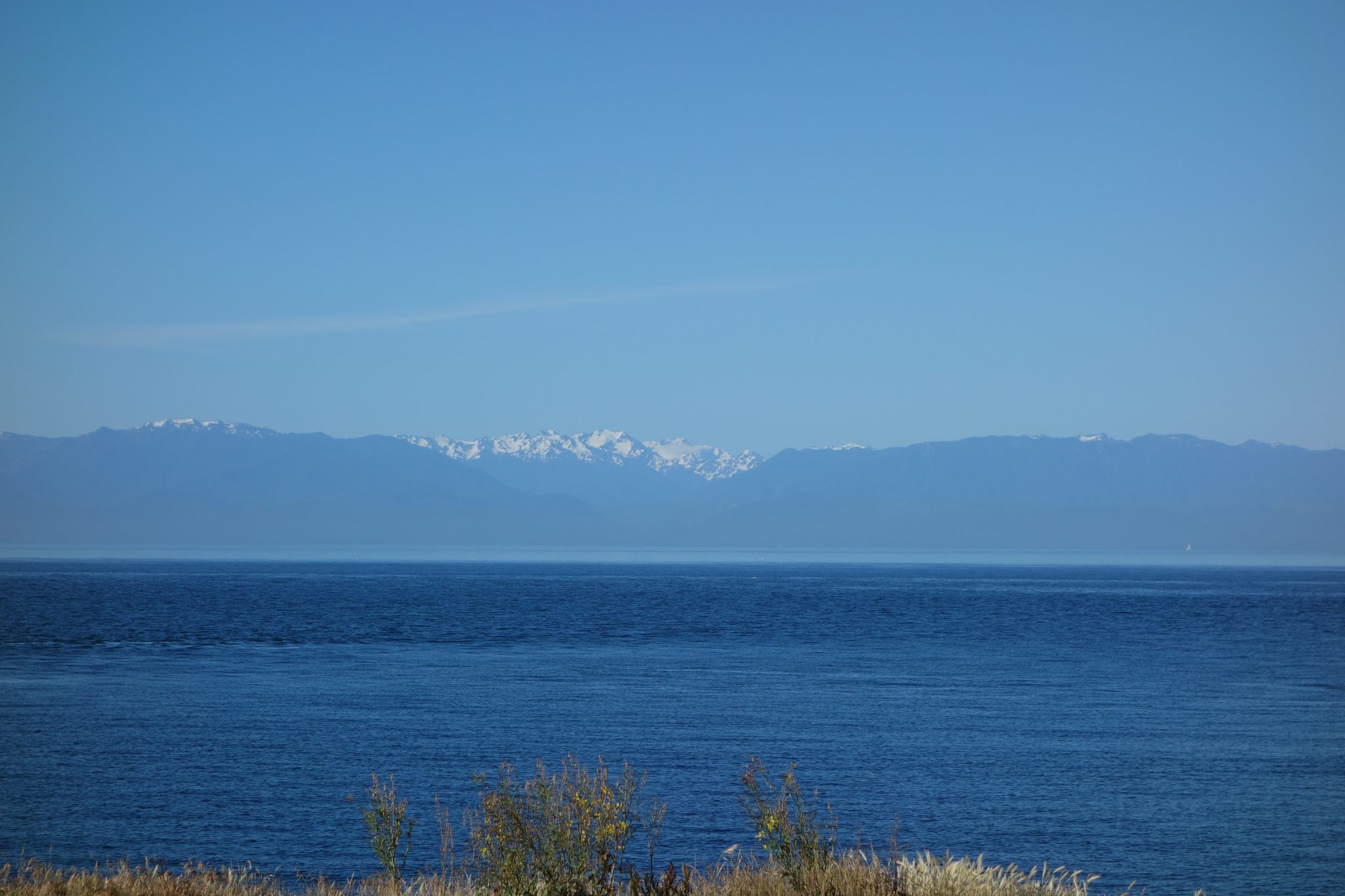 I have been on a trip – this time accompanied by Joe Swift. We are going on Joe and James’s BIG adventure because we have been invited to go to Vancouver Island to participate in the Victoria Hardy Plant Study Weekend. This  attracts about 400 plant enthusiasts for a couple of days of garden visiting, shopping, chatting and talks – hence our presence. I have been here before to do a talk in 2012 – there is a rambling blogpost on the subject here.  The difference is that this time instead of pouring with rain  the sun shone with unusual vigour and snow capped mountains winked at us from across azure seas.

So, the programme is that we fly out on the summer solstice and arrive in Victoria late morning feeling a bit shagged out and weary. The temptation is to flop into bed but that would be a bit disastrous so we prop our eyes open and schlep off to visit the historic Butchart Gardens. I have been there before and found it admirable and a bit weird – it still is but at this time of year there are many more people all of whom seem to be taking pictures of every available garishly hued rose bush. It is spectacular but I think on balance I prefer the shadier, greener corners (of which there are many) to the seas of begonias. Eventually we get to the hotel which is delightful and situated in a small town called Sidney which is on the sea and close to everything. It is popular with the retired.

Day one involves fishing. This is because of Mr Swift who is a very keen fisherman. I thought I could maybe sit in the back of a boat and sunbathe while cheering him in his endeavours but no, this is a full participation sport. We wrap up warm and take a very fast speedboat across calm blue seas with snow capped mountains on the horizon. It is breathtakingly beautiful. We arrive at Pedders Bay to meet another boat into which I am transferred and given a fishing rod and some instructions – drop a line to a specified depth and jiggle it until you get a bite. I do not get a bite but the wise and experienced Mike (who owns the boat) does and passes me the rod. It is my job to reel the fish in without accident or mishap. It is quite exciting as he runs off and round and pulls and tugs in many directions. I must keep a taut line and my rod tip up – something that can get you in terrible trouble under other circumstances – eventually I bring the fish to a landing net and he is lifted out. However, there is no barbecuing or triumphant photographs because there is a size limit: anything over 85cm has to go back as they want to keep the strongest fish to spawn the next generation up the Fraser River. My fish is over 90cm so he must go back: I am quite relieved as he is very beautiful.

The best thing of course, is that Joe did not catch one so I have ammunition with which to taunt him for evermore. He did catch a large long cod but that is not quite the same. All in all it was a wonderful day and a perfect cure for jet lag.

Dinner in the Rum Runner which is very racy for Sidney as there is well tattooed waitress who is charming and recommends that we go to a strip club in Victoria. It is a sorry state of affairs when one is mistaken for a weary commercial traveler in dire need of a stint watching bored girls undulate. Or maybe it is flattering to still be considered enough of a party guy that people think that I am not always tucked up in bed by 10:30 and instead am habitually out on the midweek razzle.

The conference opens – it is in the Mary Winspear Centre which is a large hall at the edge of town. The gathering numbers about four hundred plant enthusiasts mostly from Victoria, Vancouver, Seattle and Portland: although there are others from as far away as South Carolina. The opening session is on Friday night and is begun by the ceremonial entrance of the Vice Governor who processes in followed by a large and bemedalled policeman. She makes a speech while the policeman smiles affectionately and tweaks the Bluetooth headset in his ear.

First lecture is from Cyri Hume, a local gardener who tells the story of his garden and the traumas and excitements of downsizing. This is followed by a slightly soporific talk about fuchsias before we are tipped out and sent off to amuse ourselves. Dinner at a little pier side cafe where I overestimate the capacity of my stomach and eat clam chowder, halibut, chips and a thing called a butter tart which is basically butter, sugar and sultanas in pastry. I walk back feeling large and slightly bilious. Sometimes regret tastes delicious.

Saturday morning  – the programme is that we start at 8:45 with a lecture, followed by a short break and then two more lectures before we have a boxed lunch (which, to be honest, should have stayed in its box) and are then driven off to visit gardens. I do the first lecture and people are very kind – I have never given a talk that early in the day before but it works rather well. The audience is rested and the caffeine is fresh in their bloodstream so they are less likely to snooze off. Following me are two good speakers, Tony Spencer on the New Perennial Movement and Egan Davis who runs horticulture courses and is amazing at digging. We end the day with a knees up and a large red and white cake at the Horticulture Centre of the Pacific – a handsome public garden just north of Victoria. Entre nous Canadian cake is (whispers) not as good as British cake: even though they all know exactly who Mary Berry is and revered almost as much as the Queen. Almost…

The gardens are great – some greater than others and one or two really good – and the people without exception charming, hospitable and delightful. Sadly we saw an awful lot of them and they have slightly blurred into one .

Sunday is the same pattern except that Joe gets the early shift and we do a double act to polish off the proceedings. In between there is a great talk about the fabulous Brooklyn Bridge Park by Rebecca McMackin who is a fizzy scientist. The park sounds amazing and she talked movingly about the effects of Hurricane Sandy when the whole park was dunked under three feet of salt water. We end with another party in one of the organiser’s gardens. Sometimes work is just one long slog….

The last day we went up to see big trees and very beautiful they were: a shallow river ran past them with baby salmon flickering through the pebbles in and out of the benevolent shadows from towering Douglas firs with hundreds of years on the clock. Peaceful as anything but in the autumn the great grandparents of these same fry will come up the stream to spawn – a last gasping act before they collapse exhausted to become food for bears and bald eagles.

Nice to get a bit of ancient nature before a long flight back home.

We fly across the Olympic mountains to Calgary where we hang around trying on camp cowboy hats while waiting for the connection. Home for a day then off on another adventure….. we might get two blog posts in a month you lucky people.

I am listening to Hold On by the Alabama Shakes. The picture is of the Olympic Mountains.

2 Comments on “Hark to the soft thrumming of the aardvark”