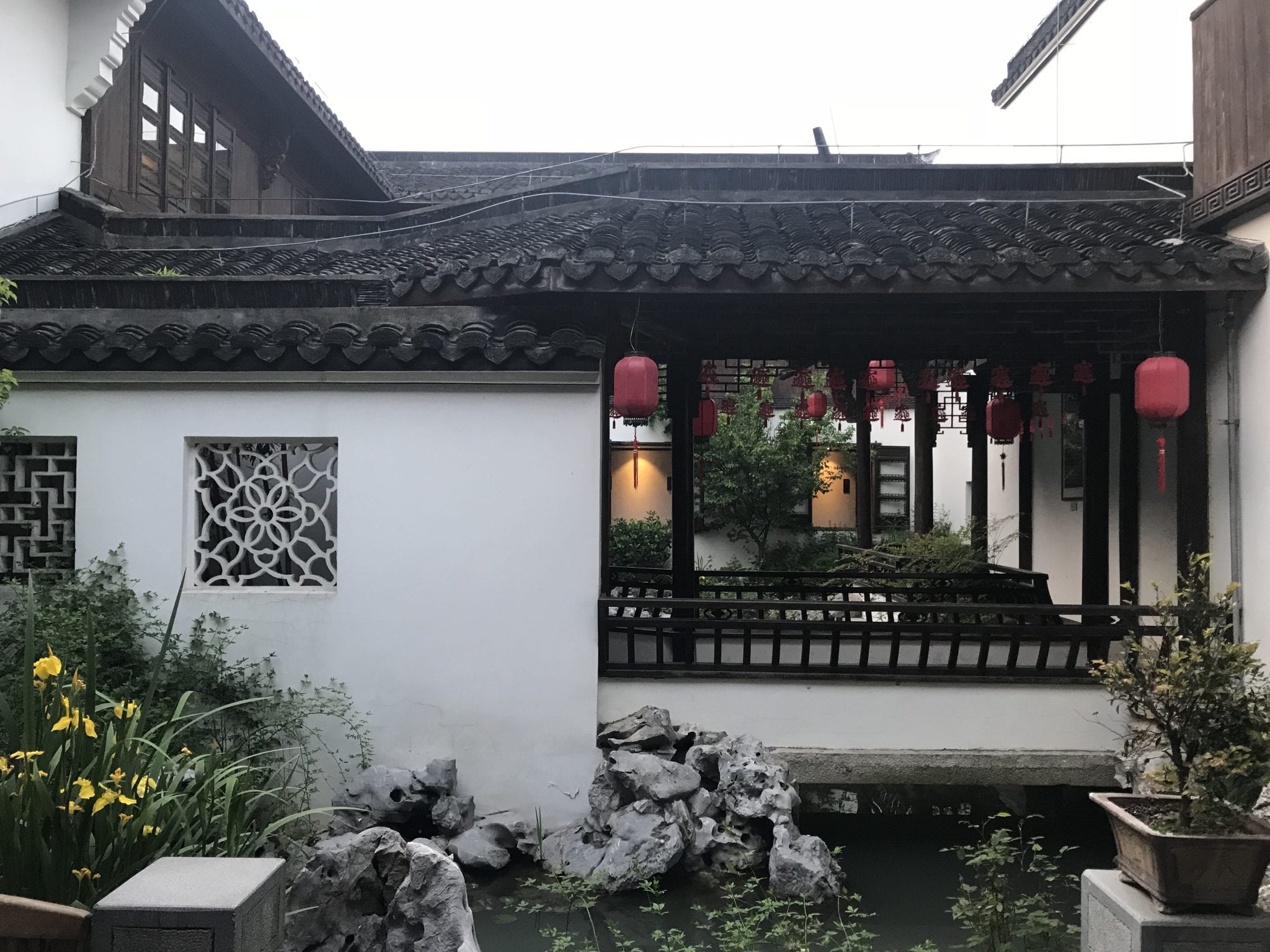 I know that many of you have sat through various indulgent travelogues that I have written in this blog over the years – most of them concerning slightly eccentric jaunts to Russia. I am afraid that this is another  story but this time I am on my way to China to judge a show and to give a talk to various assembled eminent horticulturists. I have never been to China before and my garden at home is full of the joys of spring so it is with mixed emotions that I pack too many shirts, a selection of striped ties and lots of charging cables and truck off to Heathrow.

It is the grandly named World Garden Show and I am here to judge stuff and give a talk to quite a lot of Chinese horticulturists.

Thursday 9:30: I am met at the gate by a stern looking Chinese lady who escorts me through passport control and baggage claim before depositing me with three more people who put me in a car. It is like being a cross between a visiting dignitary and a prisoner under escort.
The sun is bright and my car zips along wide motorways populated by interesting trucks carrying interesting things like copper wire, watermelons, the contents of septic tanks and lots of building supplies. Shanghai seems to have cornered the market on cranes. They are everywhere. My driver says nothing but does a lot of horn honking.

Eventually we pull up at a massive resort hotel and I am ushered into a very cushty fifth floor suite. They know how to look after a chap: charming interpreters and delightful guides. I am quite knackered but push on with lunch – apparently the Chinese have lunch at 11:30 so we are unfashionably late by expecting to be fed at 1:00. We eat shrimps, broccoli, a bearded fish and very good soup with translucent phallic mushrooms floating in it.

14:00: There is a vast river at the rear of the hotel – vast to me, modest to the Chinese – which apparently has a spectacular 10m high tidal bore every so often. I cannot get at it though as there is a large fence between us so am writing this while sitting on a stone bench under a loquat tree. There are outdoor speakers unconvincingly disguised as rocks so I am listening to Simon and Garfunkel singing Scarborough Fair which seems a bit odd.

Dinner is not suitable for vegans. A couple of us opt to walk back too the hotel through the town. There is a dance class on the street every evening which is a lovely thing to watch – only women, mostly of a certain age participate. It is perfectly coordinated and very elegant. A lot of China is regimented – even the security detail at the airport and the road sweepers march onto shift in close order – but nobody seems to mind as much as we would. There is plenty of room for entrepreneurs and businesses but the government reigns supreme. All infrastructure is financed by them, all development is supervised by them and, although people are happy to outline the flaws and mistakes, they population seems mostly content with their lot.

Friday 7:00: The mystery of the breakfast buffet. I have always been confused by hotel buffets, I am never sure where to go or what to eat especially on the first day. By day three I am swaggering around juggling muffins and custom made omelettes. Chinese breakfast buffets are even more confusing as they add even more layers to the yoghurt and fruit or full cooked shebang choice. There is also pork porridge, noodles, potatoes, rice, assorted cakes in many colours, peanuts, gummy bears, weird bread, croissants, ice cream, shellfish and baked beans. Eating a fried egg with chopsticks is a challenge.

7:51: Missed the bus but caught up eventually and arrived at the show in time for judging duties. I am judging 26 plants, 16 gardens and 36 tradestands. It is fearfully hot so I am issued with a red Donald Trump style baseball cap to protect my tender imperialist bonce. There are five of us, three distinguished Chinese, a delightful Anglo-American nurseryman and me. Our deliberations are independent so no discussions or debate. This involves a great deal more mathematics than makes me comfortable.

Saturday 8:00: Bus to the convention centre which is quite large. There are various other Europeans and Americans in attendance but they all know each other well and many have been selling their wares in China for years. We all sit down in this anteroom where we are brought coffee and interpretation kit by very young, well educated people of whom there seem to be an abundance.
By this stage I am getting a tiny bit nervous as I am first up and I have absolutely no idea what to expect. The auditorium is in an enormous university and holds a thousand people, there are lots of speeches to get the whole thing launched including a bit when the assembled dignitaries (all men) lined up on stage and pushed buttons which released a lot of fanfares and flashing light action.

10:45 ‘tis done. I pranced and pontificated as is my wont and it seemed to go down okay if judged by my usual criteria which is that if nobody sleeps, interrupts or throws things then it is a resounding success. It is nice to get it over with so I can now spend the rest of the day listening to other speakers. It is always good to see how other people speak.

11:50 Lunch. I am oddly starving especially as this is becoming quite an intense day as there are a lot of talks in very quick succession. The Chinese are only half listening as they are completely obsessed with their telephones- people answer them (quietly) during talks and are endlessly checking We Chat which is the Chinese WhatsApp. WhatsApp, incidentally, is not available in China – nor is YouTube, Twitter, Facebook, Instagram or Google so if you wish to avoid having your data harvested you could always contemplate moving to China

18:30 A banquet. It is quite a grand affair but not terribly relaxing as every five minutes I have to stand up and drink a toast with an important local dignitary. This happens at least fifteen times during dinner – they are drinking wine and I am on the cucumber juice so at least I unfuddled. I have, however, run out of business cards so the ceremonial exchange is somewhat one sided.

The banquet has also managed to give me food poisoning. I suppose that if you to be forced to spend the greater part of the night in close communion with a lavatory then better it is caused by a banquet than a casual sarnie.

Sunday 8:00: I wake up feeling a little wan as I bustle off to a ‘fan meeting ‘ which, disappointingly has nothing to do with the fan dance and more to do with me being asked questions by fifty assembled putative garden designers. From there we zip off to the city of Hangzhou along rose lined motorways that are quite crowded due to the fact that we have picked a public holiday for this jaunt. We wander round various sites of historical interest and inspect a tea garden all of which is interesting but would have been more interesting if I was feeling less like a flounder who had recently had a contretemps with a mangle.

Final call of the day is the office of a large landscape architecture practice where they are doing extraordinary things. Huge developments in distant cities, a revival of the rural economy through building and tourism, mansions on islands and the conversion of a power station into a complex of shops, offices, flats and parks.
Nothing in China is little or unambitious.

I thought I was just having a look around but actually was taking part in a small seminar about rural development. Until you have sat through a picture free PowerPoint presentation in Chinese for over an hour you really haven’t lived. After that I talked about I am not sure what for half an hour and answered questions about gardens, the RHS and Britain.

In the end it was great but I was quite pleased to get back for a lie down.

7:00 Monday: I am back in a cab speeding towards Shanghai airport. It has been a brief but fascinating visit: I should have stayed for a couple more days and seen more places but that is life.

This is a country of such energy, variety, vastness (there are 110 million people living in the city and suburbs of Shanghai – there are 65 million people in the whole of the UK) and potential that it is easy to see how screwed we are in the west. Makes you realise that democracy is possibly not all it is cracked up to be.

I am listening to Rumours by Fleetwood Mac through the inflight system. I have no idea why.

“How does ‘Quibble, bibble, curd and tribble’ sound?” asked Shakespeare

“Application is the only way” insisted the pharmacist