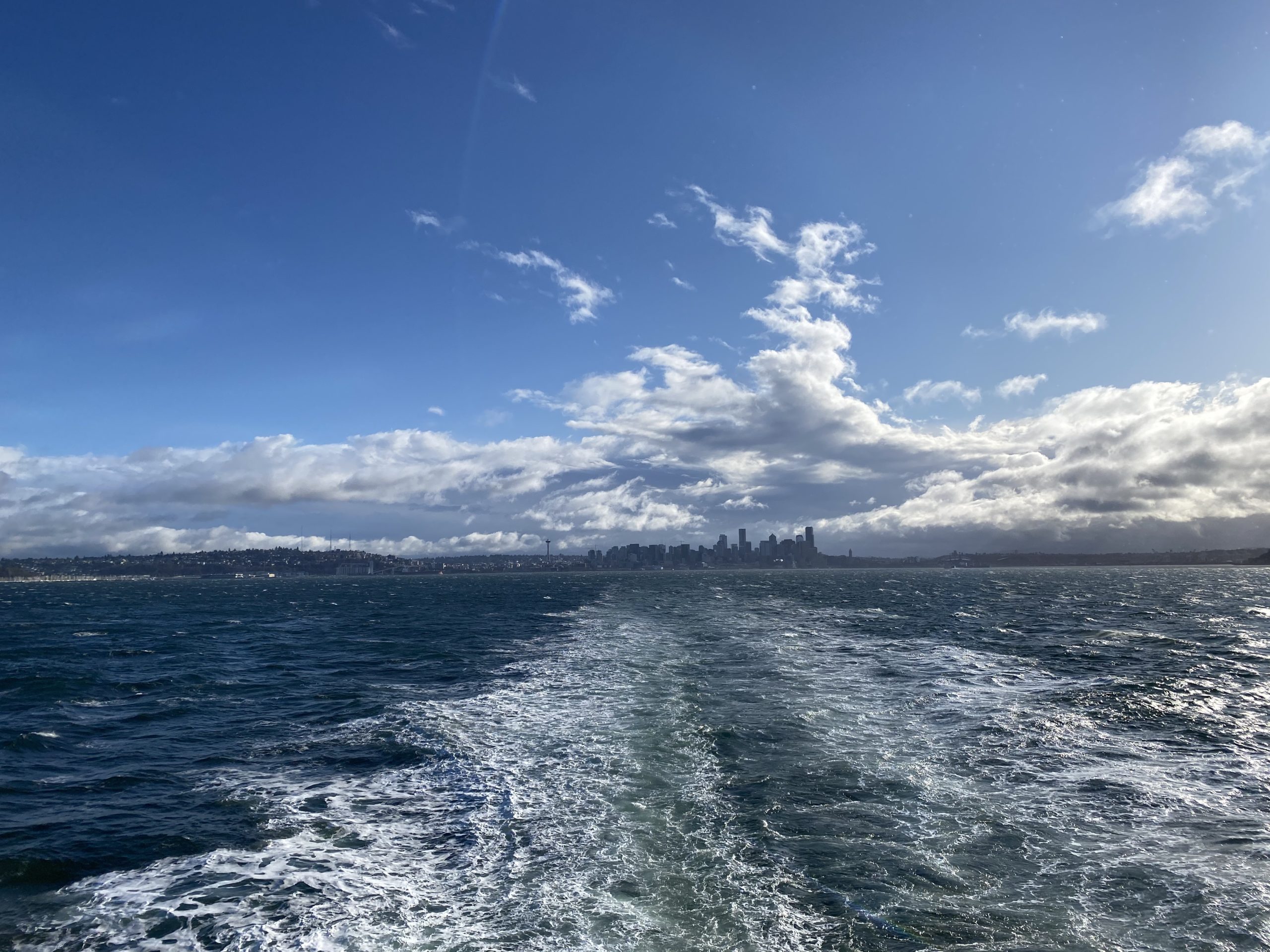 I fear we (or you anyway) are in for another multi part blog as I am off again, this time to Seattle.

Sunday: I have been here once before but only for a very fleeting visit: it was autumn 2012 and I was headed for Vancouver and had the idea that I would go to Seattle and take a bus from there so that I could admire and enjoy the bright colours of autumn or fall as they prefer to call it over here. (I understand why but I fear that it doesn’t fully capture the richness of autumn which is not just about falling leaves but about harvest and extra sweaters and the like). Anyway, long story short it rained so hard that I could see very little of interest from my bus window. There is a blog about it here if you wish to extend your research.

I am travelling on a very crowded flight and am in the middle of a row of four seats. While not unbearably uncomfortable it is not a luxurious position in which to find oneself. The main problem is how you get out to go and do a pee when your neighbour on the aisle is asleep. It seems a bit rude to wake them but climbing over a semi recumbent person is both a little too intimate and requires more gymnastic flexibility than I find myself capable of at my time of life. Nothing for it but to grit the teeth and brace the bladder until they awaken.

I am eating pizza in Pagliacci’s on Pike Street. it is 7:00pm but my body still thinks it is the middle of the night. The man at the next door table is relating the entire plot of Masters of the Universe a woman who is bravely feigning interest. He has an umbrella which acts as a sword for the “By the Power of Greyskull” moments.

Busy day as I am whisked off by the delightful Jason to catch a ferry. We are off to do the Seattle triple – the three outstanding gardens on Bainbridge Island. First up is the legendary Dan Hinkley’s garden, Windcliff. I am fully aware that February is not the sine qua non of garden visiting months but this is quite a place. A view to die for of the Puget Sound, the bone structure of a chiselled starlet (fabulous rock work and a stream that trickles and twinkles) and some truly gobsmacking plants. in particular a trio of Arctostaphylos subtly flowering and with burnished stems the colour of freshly poured Beaujolais.A Sophora nudging into flower, towering Drimys, scattered Opuntias and wherever we went the sweet scent of Edgeworthia.
All that and hummingbirds too.

Second is Heronswood. In a previous life this was the nursery founded by Dan and from whence all sorts of horticultural rarities were dispatched across the United States. Plants whose ancestors were discovered on explorations across the known and unknown world. The gardens consist of a more formal area around the house which dissipates into a lace of winding woodland paths. The gardens and stock were originally sold to the Burpee seed company who shipped all the plants to the east coast for propagating and pretty much ignored the garden until the financial crisis when it was sold to the Port Gamble S’Klallam Tribe who have brought the gardens back and continue to care for them
To be honest, it was too early in the season to get the full caboose. Lots of good Hellebores and Cyclamen but many of the plants were still asleep, the only evidence of their existence being an alluringly simple transparent plastic label protruding seductively from the earth

Number three garden (all this fortified only by a troika of pastries at breakfast time) was the 150 acre Bloedel Estate. This is less of a garden with trees than a nature reserve with a couple of gardens. We walked along well maintained paths through meadows and moss shrouded woodland. There are bridges and boardwalks, fallen trees and fields of ferns. It is really charming.
Finally we emerge by the original house that is modest and symmetrical with a view down a steep slope to the sea where you can here the incessant catcalls of a colony of seals. Near the house is a formal Japznese garden with raked gravel, artfully arranged boulders and a pretty impressive tea house large enough to hold not just a tea party but a bring and buy sale. A moss garden follows which, while interesting, is a bit shallow compared to the naturally occurring moss cavalcade available in the woodland.

We retire to eat Vietnamese buns in Bainbridge town before catching the ferry back. I am beginning to droop but nothing wakes you up faster than standing on the prow of a ferry while you cheeks lose all feeling in the icy Pacific winds.

I am listening to The Big Moon.

“A flan with a sunshine roof” quipped the risk assessor

A bat squeak of artichoke