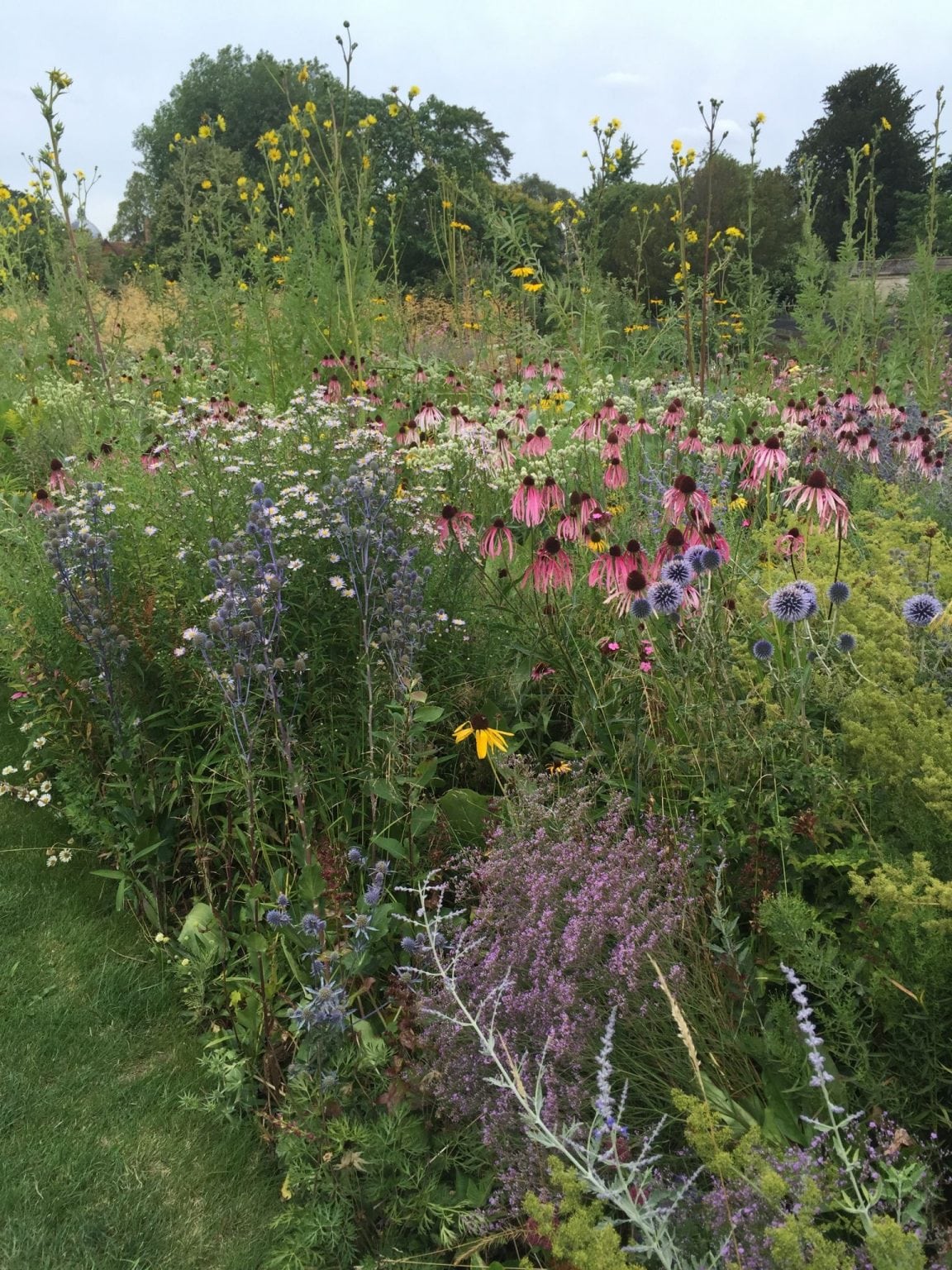 Most gardens are having a breather, people tend to swan off on holidays in exotic places where they dabble their toes in the ocean and drink things whose alcohol content is cunning disguised in a purée of papaya (I am looking at you Ann- Marie Powell). I tend to stay at home  especially this year when this place is still a work in progress.

I have, however, decided that I am in danger of becoming slightly stale and as a result have decided that I need to go and visit some gardens. It is important to see stuff, otherwise there is the possibility of being so inverted in one’s view that you find yourself repeating the same combinations and making the same gardens. And that would be fearfully dull.

So, yesterday I tootled off to the Oxford Botanic Gardens where I was lucky enough to get a bit of a guided tour. It was my first visit – which just goes to show what a rubbish garden visitor I am – even though I have been to Oxford countless times in the last forty years. The first time was to visit a friend who lived in a bedsit on the high street (I think he was retaking an A level) where we used to boil eggs in the electric kettle – the secret is to suspend them above the element in a handkerchief: a trick I have never forgotten- but never used.

Anyway, let us return to the point. The Oxford Botanic Gardens has been there since the seventeenth century (i) and is basically a learning garden. There are family beds where the plants are all laid out according to botanical leanings. I am not sure whether this is the place for a lecture in basic botany ( nor am I sure that I am the person best qualified to deliver such a lecture bearing in mind that I got an E in ‘O’ level biology) but plants are classified by kingdom, phylum,class, series, family, genus & species. You have the internet, look it up… There are other beds that edge towards the physic garden where the plants are laid out according to the diseases they are used to treat – oncology, haematology etc etc. All this is all very well but there is no indication anywhere of this – I only know because I have seen such things before and I was told by the director.

This is an interesting point – none of us really want to have our garden visiting interrupted by ginormous signs and interpretation boards but in some cases a bit of guidance would be helpful. Otherwise there is a danger that people wander past and think that such and such a bed is really just a badly planted, mismatched border rather than an aid to scholarship. I think the problem is that the intellectual heft of all concerned is such that they naturally assume that everybody is as clever as they are and of course they will understand: in reality most of the paying visitors are after a nice walk, some flowers and somewhere to eat their sandwiches.

That may all sound a bit tart but it is not intended to be – the plants are healthy and to the point, the beds are crisply edged with good quality steel and the surrounding walls and architecture is, of course, amazing. Sometimes gardens and parks in cities are intended to be a refuge from the surrounding buildings – not so here where the glimpses of towers and spires are an important part of the garden. Mind you, Oxford is not Hull.(ii)

Further on is a fine vegetable garden – whose produce is taken to the homeless shelter – a good stacked herbaceous border and some slightly tired glasshouses containing some really good plants. I liked the wet house in particular with its crowd of Amazon lilies, papyrus and other things that I did not recognise but were satisfyingly damp and steamy. The cactus greenhouse, however, was a bit shabby. I think the plan is to replace all of them soon but before that can happen then some serious funds must be raised. Oxford, like every garden/museum/monument/church/public institution is short of cash for things that are not considered, by some, essential.

At this time of year, however, the main event are the Merton borders which are fizzing with prairie goodness. Echinacea, Solidagos, Eryngiums, Grasses, Silphiums (iii) and the rest. It is the work of the good Prof, James Hitchmough. He has done some amazing work in many places – most notably in the Olympic park in East London – his work is always spectacular and looks much easier than it actually is- to establish such a thing from seed involves a lot of sterilisation, weeding, sand beds, jute nets and small bags of very expensive seed. The question is that for a proportion of the year this sort of planting looks, if I may be frank, a bit shit. The dilemma is whether you water down the joyful spectacularness of the summer months in order to give the visitors something to look at in the off months. One problem I have always had with gardens is the urge to have ‘year round interest’ which invariably means giving over some of your precious space to hefty evergreens which look unutterably dreary during the summer months.

This style of gardening tends to have a different problem – amazing in summer but a bit rubbish in winter and spring. I know that there will be seedbeds to shimmer in the frost (I have written lots of pieces like that) but have you ever counted the number of days when the frost is sufficiently dry and cold to enable said shimmering? Last winter there were none and most years there are maybe three or four. Unless of course you live somewhere properly cold. I also understand that it needs to be a bit barren in early spring in order to make maintenance simpler – they run over the borders with a blowtorch to burn off pesky weeds. The other problem is that if you introduce trees or shrubs then you get higher shade and the mixtures have to be tweaked which may interfere with the geographical purity of the scheme.

Tricky: but finding an answer will be interesting.

So (iv), in summary a very interesting and exciting garden to visit, you should all go if you get the chance. The parking is non-existent but the gardens are only short hop from everywhere. Reminder to self – get out more. Also try to pick a less grey day – borders like this need blue skies. Website here.

I am listening to Pick up the Tempo by Waylon Jennings.

(i) Oddly there is a yew there which bears a sign saying it was planted in, I think, 1645 which makes it three hundred and something years old. I was very struck by how slim it was for its age. I rather expected it to be at least thickening around the midriff as it sloped into middle age. Not at all, it remained slim and toned.

(ii) you see, unlike other blogs, if you come here you get deeply insightful geographically based philosophy.

(iii) which the spellcheck on my iPad reads as ‘dolphins’. Not the same thing at all.

(iv) I know. I also was told that was bad form to start a sentence with “So”. Tough. My sentence, my choice.

He pasted plangent posters on the palisade

The Cheesemonger Staggered Under the Weight of his Responsibilities