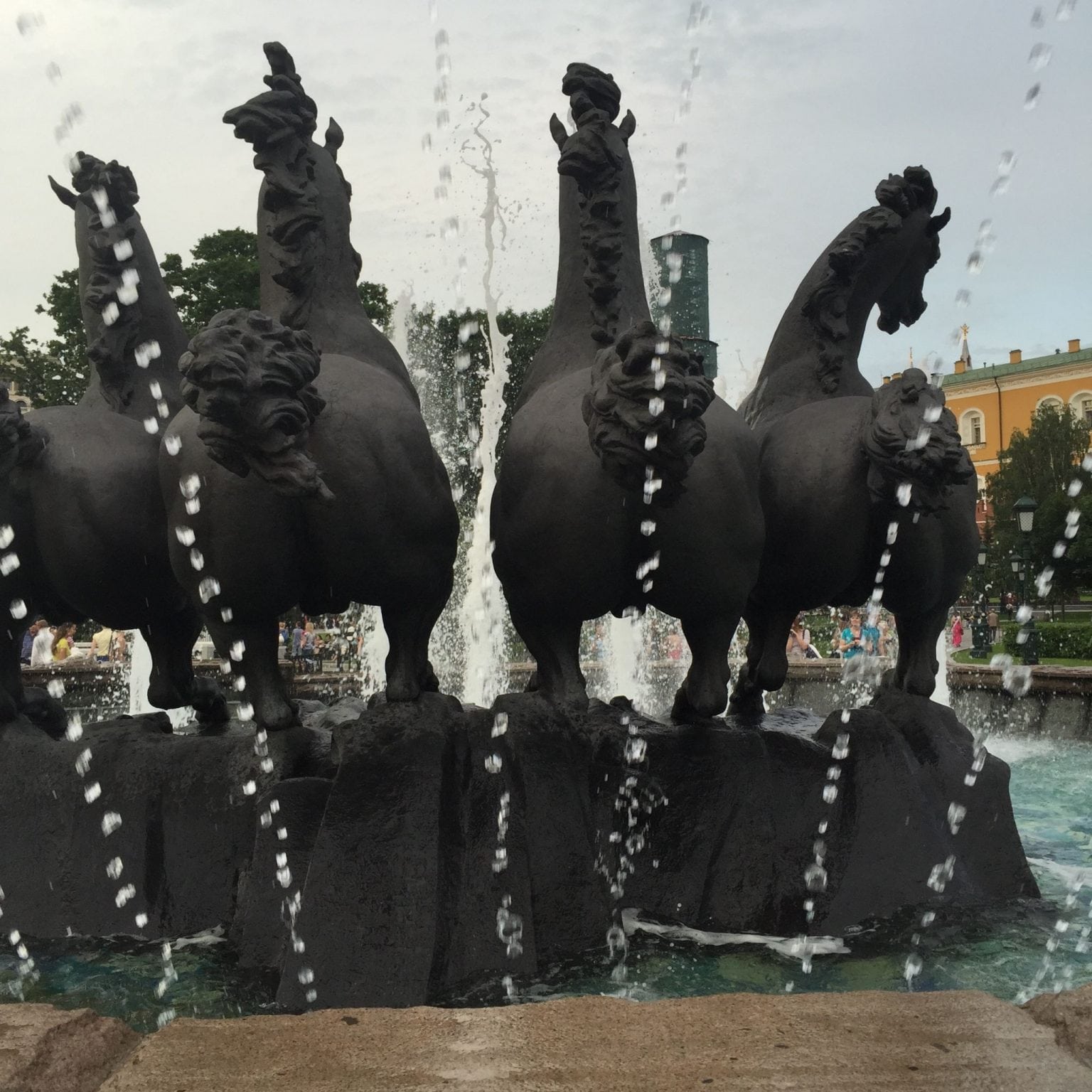 “In one minute I bring you cake.”

This is a phrase to lighten the heart of a chap. In this case it is uttered by a very slinky blonde air stewardess 30,000 feet above Poland en route to Moscow. It says a lot about my stage of life that the idea of cake is marginally more alluring than the stewardess.

I am travelling once again to the Moscow Flower Show this time with Transaero Airlines. This is not a company of which I had previously heard but they boast on their website of winning an award for Most Improved Airline so I must be grateful that I did not fly with them the first time I came to Russia. That was three years ago when I flew BA and had a full length bed in which to cavort. The next time was Aeroflot and not quite so luxurious. This time it is Transaero. My stock is obviously diminishing. However, as the flight is only 3.5 hours I reckon I can cope.

The in flight entertainment system is interesting. A screen flips down from the ceiling but it only has one channel showing a cartoon in Russian. The cartoon seems to involve handsome princes with improbably barrel chests; the ending will, not doubt, be happy but I am not sure that I have the patience to stick with it to the end. Instead I am going to read Raymond Chandler and watch Cat Ballou.

I have had lunch. Duck confit with something which is described on the menu as “coffee mustard jam” and a strange chicken thing with red potatoes which were very difficult to spear with the fork provided – I suppose that there must be a rule about blunt tines to avoid stabbings. Oddly the coffee-mustard jam was quite good – perhaps the fact that there appeared to be not a trace of coffee helped matters.

Arriving in Moscow is much the same as arriving in any airport anywhere except that the passport control people seem to look much harder at you than in other airports.

Day Two: Judging day at the Moscow Flower Show.
At Chelsea the judges usually assemble at about 6:30 to look over the notes and eat bacon sandwiches, we then sally forth and judge 17 gardens in time for lunch. In Russia things are a little different.
My schedule for today reads:
10:00 Judging commences
12:30 Official opening and press briefing.
13:30 Interviews
15:15 Break. return to hotel.
18:30 Gala evening (Cocktail dresses)
Which sounds perfectly manageable.
The reality is much more interesting.

10:00 A wander around getting my bearings and finding out a bit about the gardens. There are 31 of them so if we were to judge them all by 12:30 then we would get 4minutes on each garden which seems quite tight!
11:00 We are still waiting for one of the judges to turn up.
11:30 We start judging. There are lively discussions and lots of sparkiness. All good.
12:30 Official opening to the press. Judging is halted: we have managed five gardens, it is very hot. There are a number of speeches in Russian ( I have a delightful interpreter called Evgeny who whispers a translation in my ear) and then I suddenly hear my name being called so hurriedly rush onto the stage and add my speech to the growing heap of welcoming words.
13:30 I give interviews to various television stations, newspapers, websites and a magazine called Snob. My co-judges are similarly occupied.
14:15 One of my judges has to go to work so leaves. We carry on judging. Another judge has to go and give another interview so we are down to four.
15:15 Lunch is announced so we all trek off to the other end of the park for a very welcome break. It is still very hot. You may recall that this was the time designated for return to hotel, quick snooze, change and back for the gala.
16:00 Back to work. The missing judge has returned but we have now lost another one due to heatstroke.
19:00 Finally we finish judging. Medals are listed and allocated.
19:30 Gala (I am unchanged and not very cocktaily) in which various Muscovite glitterati wander around and we eat cold meats on skewers. Clive Boursnell (the photographer) and I have a cup of tea.
20:30 I may have made a speech but I cannot quite remember.
22:00 Taxi.

Day Three: Today I have done various things.
I have been rained upon.
I have helped to open the Flower Show to the public by sharing a podium with the Culture minister and the deputy mayor of Moscow.I made a speech.
I have given an interview to a journalist who was convinced that I was Prince Harry’s gardener. It seemed a shame to disabuse her.
I then went to Moscow’s 24 hour television channel where I gave an interview about urban greening to a shiny suited journalist called Ivan. We sat on opposite sofas in a huge studio. The conversation was very stilted as I would say something and wait for it to be translated for him, then he would say something and wait for it to be translated for me. It does not make for snappy repartee.
I had fish soup for lunch.
I made another speech and announced the winners of the medals – they were given out along with goody bags and huge bunches of Ecuadorian roses.
I then listened to more speeches.
I then made another, very short, speech.
I sat on a comfortable sofa and talked about museums and the restoration of imperial palaces.
I wandered around the show giving feedback.
I then danced with the show director to Mr Sandman.
I ate some rather delicious stuffed Russian buns. This is always a highlight – buns with spinach, buns with egg, buns with something obscure and buns with apple.
I drank some filthy pumpkin juice.
I went back to the hotel.

Day three
No speeches from me today which came as a bit of a relief to all concerned.
Gave out more feedback before being whisked off to the largest children’s hospital in Moscow to look at potential sites for gardens. It consists of a grid of early 20th century buildings surrounded by dour patches of grass and trees. I was photographed with the director who is delightful even though he looks a little intimidating.

Launch of a new variety of rose. More speeches.
It is French day at the show so the French trade attaché is being feted.
More time on the comfortable sofa this time with a very insistent client.
Off to Red Square and the Kremlin for a bit of touristing. Trundle around the metro a bit.

Day 4
It is raining. Hard. Lots of it.Proper old fashioned superpower rain.
I am going to the airport in the care of a taxi driver who is treating these monsoon conditions with disdain. As a result there is quite a lot of aquaplaning and nervous gripping of the upholstery.
We get there unscathed and return home. Quite knackered but in time for Hampton Court and to see my friend Ann-Marie Powell win a Gold Medal. Hurrah.

I am listening to Melancholy Polly by Alison Moorer. The picture is of a fountain in the Alexander Park by the Kremlin. You have to walk under these jets of water behind these enormously muscular horses bottoms. There has to be a metaphor in there somewhere.

Schism Was Never Good for the Papal Digestion