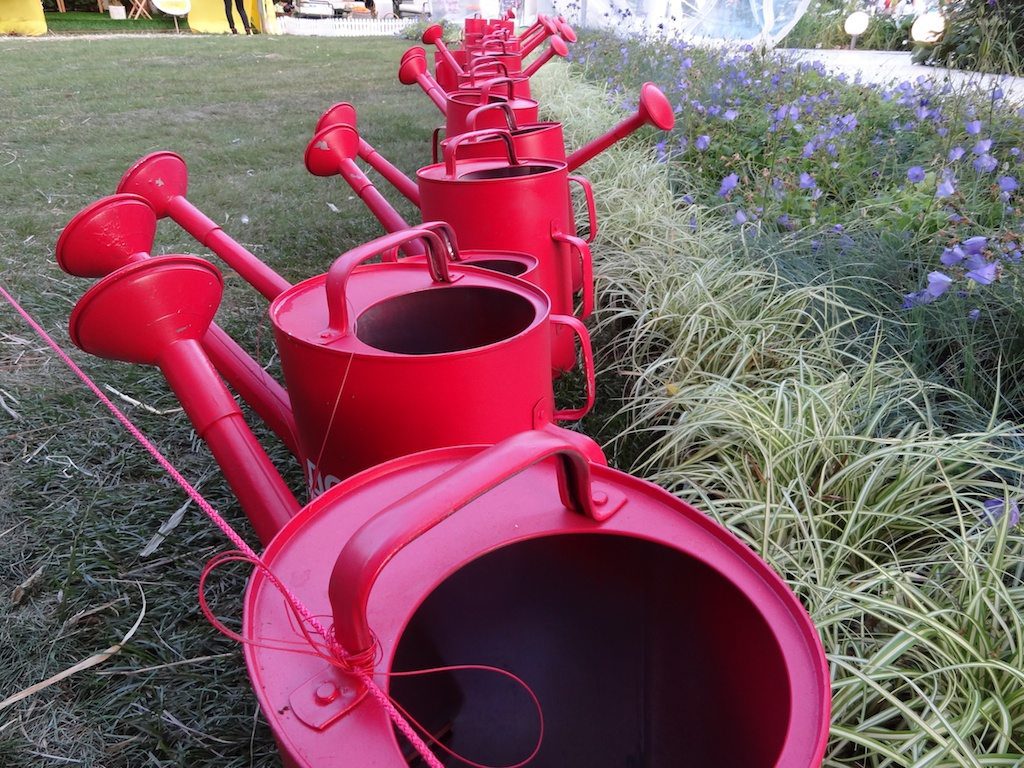 Those of you paying attention may recall that I began my last blogpost with the phrase “This is a bit weird”.

Loath though I am to repeat myself I must say again: this is a bit weird. I am beginning this blog while sitting on an aeroplane many thousands of feet up . I am happily ensconced in the Business Class cabin for the first time in my life (i) with nice Ladies offering me champagne at 9.00 in the morning.

I am the only passenger. Yes, there are various people on the other side of the curtain but in this bit I am the only one.

The nice Ladies are becoming increasingly insistent in their attempts to make me drink champagne.I fear they may be disappointed in me, their only charge.I imagine my parents have, on occasion, felt the same way but for different reasons. It is a strangely embarrassing experience to be the sole focus of two stewardesses and a breakfast menu that includes fruit jelly.

Why am I on this aeroplane?

Because I am going to judge at the Moscow Flower Show.

It was a very wonderful few days where lots happened: I think the easiest way is to give you a list: otherwise your patience will be sorely tried.

The approach to Moscow airport is covered in trees. Birches mainly and every so often there is a clearing full of little Dachas. The Heathrow equivalent would be as if somebody had reforested Staines.

The traffic is ghastly: like Saigon but with Range Rovers instead of motorbikes.

Quick change and then even more  traffic (involving crawling past our destination, driving another half mile, doing a U turn and driving back again)

Arrive at Gorky Park in time for the Gala opening of  the show.

Saw a lot of very pretty girls with cheekbones and long legs (all of them younger than my daughter) many of them wearing dresses made of flowers.

More nice ladies tried to make me drink champagne. They were again disappointed

Talked to various people in Russian. At least they talked in Russian while I nodded and smiled.

Had my photograph taken a lot of times. (ii)

Ended up in a restaurant in the middle of Gorky Park whose tables consisted of tented awnings. Like eating dinner in a four poster bed.

This place is exhausting.

Ate an interesting sausage and a sort of pancakey thing made of cream cheese and flour for breakfast.

Got a cab to the show,invented some judging criteria, judged twenty show gardens in the company of more gloriously mad Russian women.

Gave an interview to Russian television (about 2:20ish) (iii)

Ate more interesting sausage (this time with Aubergine and peppers)

Woke up, had a shower, got dressed (you probably don’t need such a level of detail)

Went back to the show

Met the Moscow Minister of Culture

Ate rather delicious Bready things stuffed with onion and egg

Gave an interview to the “Russian Alan Titchmarsh” (his words)

Minister did not show.

Took off shoes and walked barefoot on turf with blonde presenter

I may have missed out a couple of things.

Went to a nunnery and place of pilgrimage,saw hundreds of people queuing, looked at icons

Genuflected before undecayed body of saint,

Gave interview to some Radio station

Made a speech to assembled multitude on subject of roses

Went to hotel, packed, changed, went back on metro, walked around Moscow looking at buildings (accompanied by interpreter/minder: foreigners are not really trusted out on their own as we might get lost/mugged)

Got slightly dampened by the dancing fountains.

Struggle through mass of humanity

Eat fishy thing, sleep fitfully, watch bits of The Wild Geese, realise with a sinking heart that the temperature in London is 10 degrees less than Moscow and it is raining.

I had a fantastic time, was beautifully looked after and cannot wait to go back. I will write about the actual gardens next time as I feel this post is long enough for even the most attentive among you.

I am listening to Leonard Cohen singing Bird on a Wire, or close to singing as he ever gets. The picture is of watering cans.

(i) I know, it is a bit sad that a man of my age should never have ventured beyond Economy. Probably best if  I don’t get used to it.

(ii) Russians like being photographed. Very much. I, on the other hand, am not that keen for reasons previously stated mostly to do with general gnarliness and vanity. I am particularly unhappy about being photographed with the very glamorous. However, Russians take it very seriously: for example a couple wander through show, spot a (for example) metal elk, she goes and stands by elk while he holds camera. Rather than just standing there smiling slightly awkwardly she then goes into full, pouty, glamour model posing. Lots of tits and teeth, body angled just so, hands in hair etc etc. Wonderfully un-British.

(iii) It is very refreshing to do things on foreign language television. It does not matter what sort of fudge you make of your words as you know they are going to dub whatsoever they wish over your moving lips.

Disco Dan And The Fiery Earwigs

The Cable Car Was Smeared In Broad Bean Puree

17 Comments on “The Babushka Shimmied”